Communication with registered Admission Leads and Notifications, Comments and System Alerts to Students and Staff

ECAS allows to record every interaction between system and its members and between different members at all levels. Thus while nurturing the concept of paperless office, ECAS also maximises the efficiency of dissemination of information amongst its user.

Difficulties and limitations in conventional method of messaging

Sending handwritten messages in school diary is a method adopted by teachers for very junior classes. This method is not only cumbersome, but also not quick and efficient. The only alternative to this is personalised phone call or sending SMS to each parent of the very young students.

Sending information by individual phone calls is not only time consuming but also not realised fully as it might be possible that all parents have not directly attended the call.

Sending information through SMS is prone to complaints of non receipt and somehow it becomes the liability of the institute to ensure all users have received SMS. Even though there might be a problem at the user end, still there are complaints and it takes lot of time and energy in clarifying that all users had been informed through SMS.

Sending information through automated emails, might be most cost efficient but has the same issue of delivery as most emails might be marked as spam in the recipient inbox. This too takes lot of time and energy in explaining to parents that information had been sent and finally if the information is not seen in time by all the intended users, the purpose of the excercise fails.

Advantages of sending Messages and Notification through ECAS

Every member registered in ECAS has a communication logbook. Where all the messages and interactions with the user get recorded.

Sending the same SMS, Email or phone call through ECAS has an edge over the conventional method, because ECAS allows to make a record of each interaction. The SMS and email sent from the system are automatically recorded in the student logbook. Any verbal messages through phones or in person can also be entered as brief record in the Communication and Follow up management module.

Having all the interaction recorded in the member logbook, it is possible to display the list of all notifications to a member on his dashboard when he checks into his account. Thus one policy and standing instruction that students and parents should check their notifications inbox on their dashboard when they log-in transfers the responsibility to the user himself. It is upto the user if he checks the information regularly or not. But the institute cannot be held responsible for not providing the information.

Screenshot of the student dashboard depicting the messages sent to this student by the administrator or by the system have been recorded in the student communication log book and are visible in the Notifications Tab of the Student Dashboard. 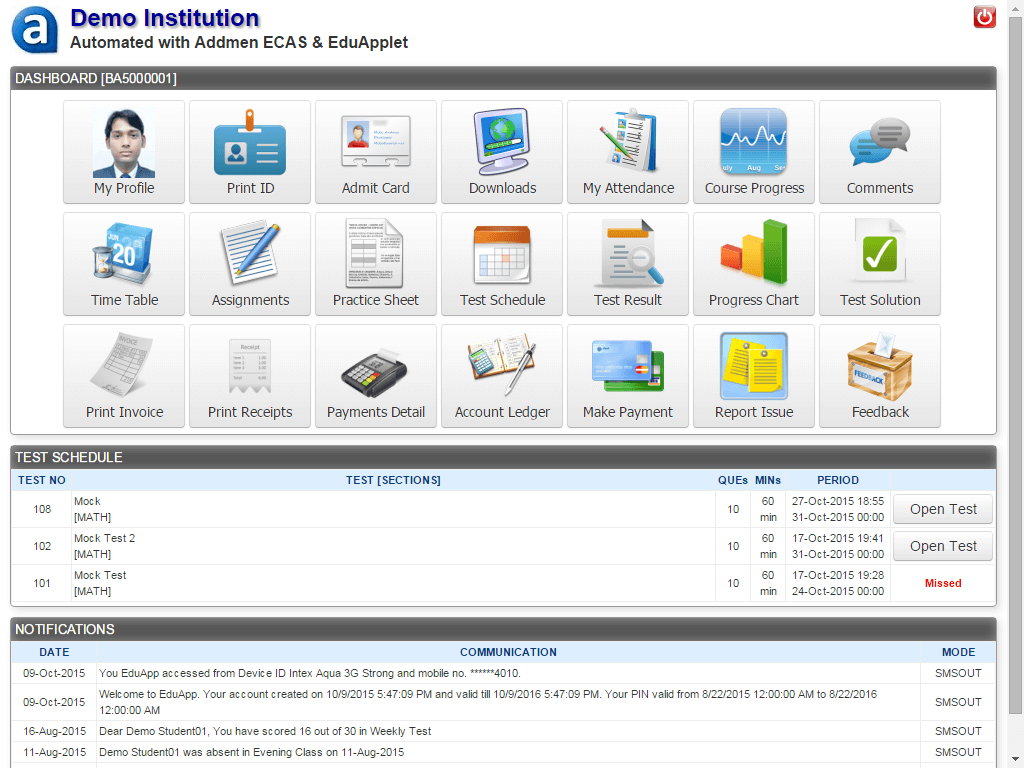 Notifications can be seen of the Android App - EduApplet

Notifications sent to the members of the ECAS can be seen in EduApplet, the Android App which is an extension to ECAS. With the advent of EduApplet, all the limitations associated with conventional methods of messaging have been eliminated. Now, the convenience and direct reach of SMS is achieved with Zero cost of Email and security of browser account. The messages sent to the individual or to the group to which individual belongs and the messages sent by the system regarding Attendance Fees and other services are instantly received on the android smart phone of the user. This communication is faster than SMS plus is free from the chances of non delivery due to DND activation or network failure. 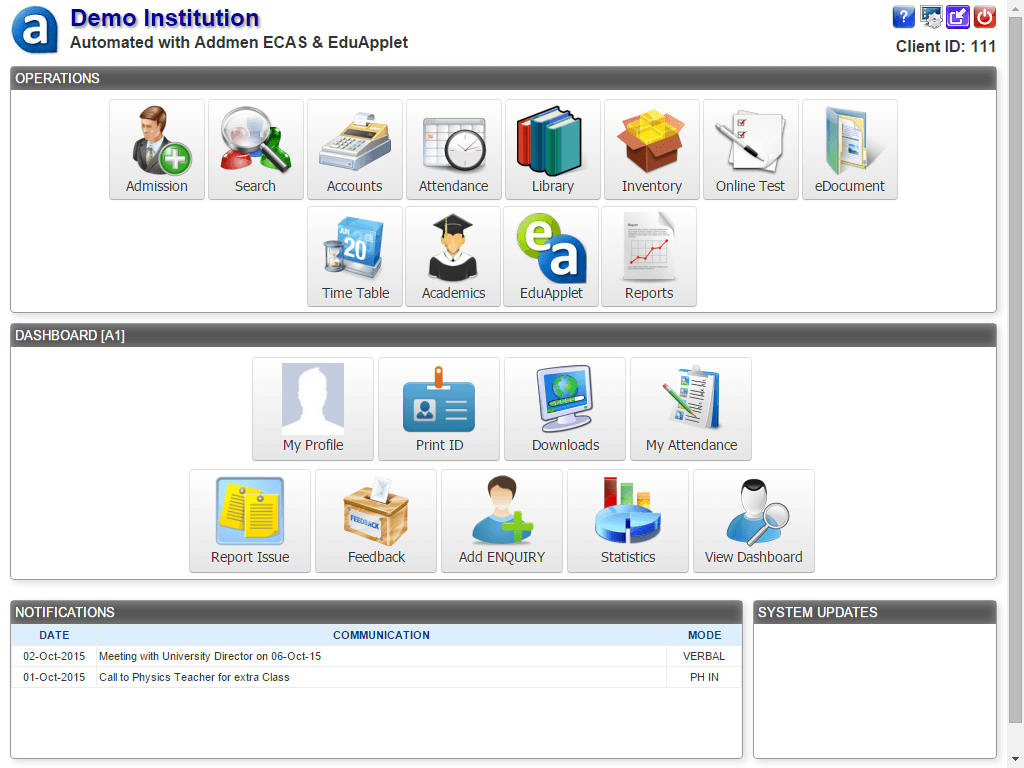